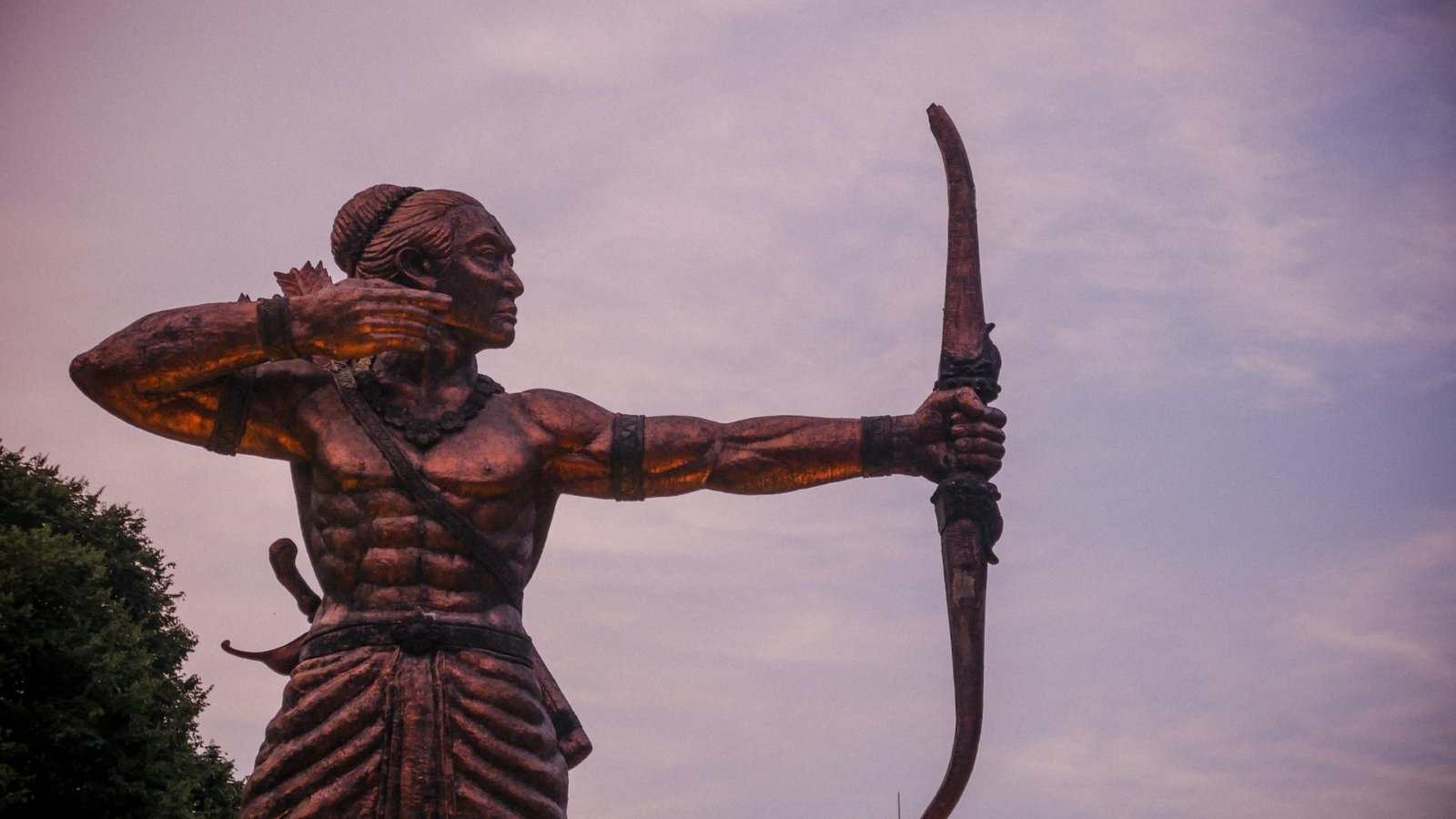 About 5000 years ago the great acharya (teacher) Drona decided to test his students’ skill in archery. To test their aim he set up a wooden bird as the target on a distant tree and invited his students one by one to aim for the bird’s eye and shoot.

First he invited Prince Yudhisthir, the eldest of the lot, he held the bow and took his stance but as he was about to shoot Drona interrupted and asked:

“I see a wooden bird, the branch and the tree, the leaves moving and other birds” – Yudhishthir replied.

Drona ordered him to put down his bow and arrow and return to his place.

Then he called Prince Duryodhana, he too was allowed to take his stance and as he was about to shoot Drona interrupted him and asked “What do you see?”

Duryodhana too replied that he saw the tree, the target, the leaves moving, the birds flying around etc. So he too was ordered to stand down and return to his place.

He then called all of his disciples one by one but all said the same and were ordered to stand down and return to their places. Even Drona’s own son Ashwatthama couldn’t satisfy his father.

And it was just then that all the disciples started murmuring amongst themselves about what was going on and whether they all had failed. Then Drona invited Prince Arjuna, the only one who wasn’t called yet.

Arjuna grabbed the bow and took his stance and aim and as he was about to shoot Drona asked the same question, “What do you see, Arjuna?” to which Arjuna replied:

“Do you see the branch, the leaves moving with wind, the flowers, the fruits, other birds flying around, the tree, the surrounding trees, your brothers and classmates, your teacher etc.?”, Drona inquired.

“No Sire! I only see the bird’s eye!”, Arjuna replied.

Hearing that Drona commanded him to shoot. And as Arjuna released the arrow, it pierced the bird’s eye and the target fell down.

Drona embraced the chap and told others, “When you want to achieve something, you must focus on it. Close out all other distractions and concentrate only on your target.”

You see friends, the same is true in meditation as in our life, we see more of what we chose to focus on and that we then manifest in our lives hence I define meditation as strategic and tactical agnosia or unknowing.

We have created this world we live in and yet we complain about it all the time. And because we have a disharmony within ourselves, we create exactly that out in the world. And then it’s no surprise world seems to be getting more chaotic everyday. But if we were to find harmony in our thoughts, words and deeds, if our actions aligned with what we truly desired then we won’t be on the verge of destroying our planet.

But we often lose focus, we lose track of what we really want and we take the easy way out, we cut corners and then we stumble upon chaotic situations which no one knows how to solve because we as the human race have so much disharmony within our own being and the exactly what we project out in our lives. We still have a chance to reverse climate change, get rid of poverty, corruption, inequality, exploitation, child labour, crimes, almost anything. But that’s just the beginning, true reward of meditation is that we’ll start being more happy within and without.

So the Mundaka Upanishad says:

“The mantra is the bow, the aspirant Is the arrow, and the Divine the target. Now draw the bowstring of meditation, And hitting the target be one with him.”

Because it is when a man is one with his deepest aspirations, he creates the reality he truly aspires for. In life, we grow whatever we put our focus onto. Let’s say you want to buy a car, once you’re truly invested in that idea you’ll suddenly start noticing that particular model of car everywhere, you’ll start seeing flyers for car loans, you talk about it with your colleague and he tells you that your company has a tie-up with that manufacturer and they’ll offer a special discount to you etc. In mysterious ways the opportunities to buy that car will begin to appear automatically, it’s almost as if a comic conspiracy goes on. And the same is true for everything in life. Hence the saying “Be careful about what you wish for, for you might get it”.

Let me know in the comments what are your thoughts on the story, also feel free to leave your questions and suggestions.

As always if you liked the post, share it with your loved one’s so they can benefit from this too. Have a magnificent day. Peace✌🕊